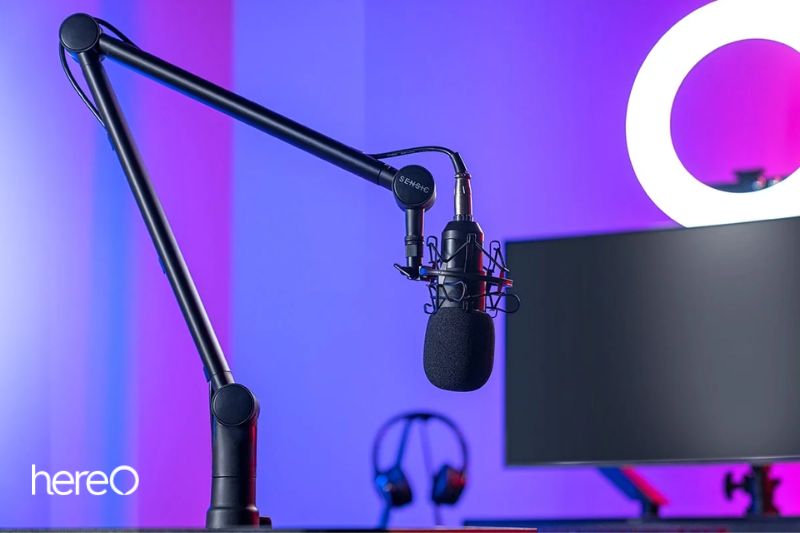 A microphone can be mounted in various ways and places. For instance, to put a microphone on a vertical stand, you just place it in its cradle and adjust the stand to your specifications.

However, you might need to place a microphone differently, particularly if you’re performing or recording in an unusual environment. For instance, you may install a microphone on your stand using a second clamp to record the sound both at voice and guitar levels. No. Although the majority of mic stands include universal adapters for a variety of microphones, some won’t be able to hold a heavy, customized, or non-standard version.

You cannot presume that your microphone will fit the stand at the venue or studio, despite the likelihood that it will. If you prefer to utilize a non-standard mic, you can purchase adapters.

How to Set Up Microphone Arm

How to set up a microphone arm

Your microphone’s arm could take the shape of a boom with a vertical stand (see above) or a desktop mic with a long arm.

This kind of microphone is probably employed in a recording setting, especially if you’re recording in your home studio and handling your own mixing and editing at the same time.

Lay out your entire setup, find a comfortable and ergonomic seating position, and determine the ideal location for your microphone so that you can reach everything else you need and see your screens.

Once you’ve found the ideal angle, fasten the clamps—both those for the arm and those that attach to the desktop.

How to set up a boom mic stand

Place the boom such that it extends immediately above one of the stand legs after assembling the vertical part. As a result, the stand won’t topple over. Avoid overtightening the clamps.

Once they are tightened, don’t try to loosen them again until they are firm. You should first undo them. To secure it, wrap the lead twice—once around the vertical end of the stand and once more around the boom.

How to put a pop filter on a mic stand

These, also referred to as pop shields or pop screens, lessen air noises, hissiness, and plosives from vocals to provide a more polished and expert sound in both live and recorded settings.

They are a circular shield that can be simply connected to your stand and is composed of stretched nylon, foam, or metal mesh with the added benefit of shielding your microphone from corrosive saliva.

Even better, you can create your own using tights and a metal coathanger! Place the filter about an inch or so away from the microphone for mild singing and three to four inches away for stronger rock voices. 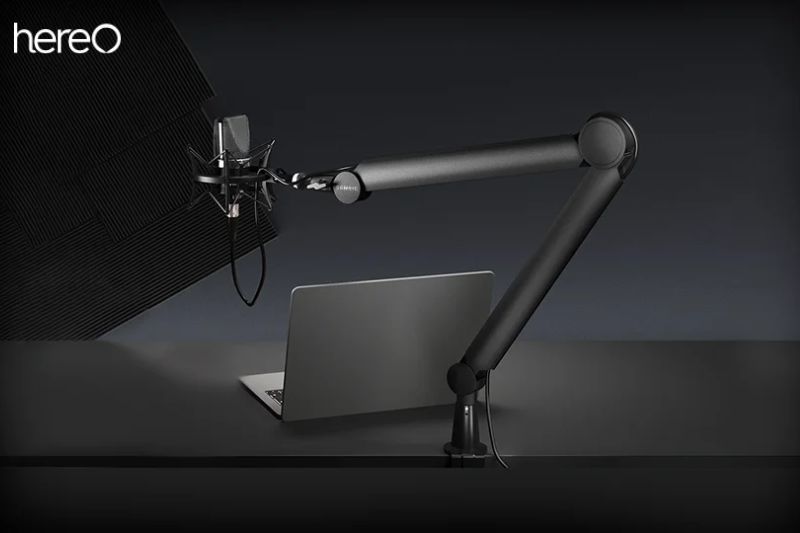 Your projection is lost. This might be the case if the mic wasn’t placed close enough to where you needed to be or if you were standing too far away from the mic stand.

You keep slamming against it or knocking it. On the other hand, if a microphone has been placed too close to your guitar, you risk banging into it whenever you move. This is particularly problematic for stringed instruments like the guitar since it can cause tuning issues.

The boom hasn’t been sufficiently secured and drops, either to the side if it’s been inclined or vertically, shortening your stand.

It is impossible to loosen the stand’s clamps enough to adjust it. It’s easier if you’re following someone else, but if this occurs during rehearsal, just ask for help.

The lead is tangled up with or twisted around machinery, a person, or both!

Checking your setup again before taking the stage is the easiest way to prevent all of these issues. Always leave everything as you found it for the person coming after you, keeping health and safety in mind. That’s just polite behavior for musicians.

You can’t adjust the stand

Take the microphone out of the stand and hold it if it is too high or low and the clamps are too tight. Make sure to unwind the lead, and be cautious to avoid tripping. If this is not a possibility, try using another microphone, or make a joke and ask for assistance. Additionally, you can alter your position if the stand is too far or too close.

FAQs about How to Set Up Microphone Arm Are mic arms compatible with all mics?

All microphones can be used with mic stands. This does not imply that it is as easy as unwrapping a brand-new microphone and placing it on any mic stand, though.

How to attach shock mount to mic stand?

Where to put mic arm on desk?

On either side of your desk is the spot where mounted microphone boom arms are most frequently installed. After installation, you can easily move the boom arm so that it doesn’t hinder your field of vision.

With the right knowledge and the right tools, setting up a microphone arm for a performance is easy. When it comes to microphone arm set up, remembering to stay organized and holding tight to the basics will help you get the job done with ease.