There are many different fitness tracker options on the market these days. Two of the most popular brands are Fitbit and Samsung.

Both offer a variety of other models to choose from, but two of their latest and most significant are the Fitbit Sense vs Galaxy Watch 4. So, which one is the best?

The Samsung Galaxy Watch 4 and Fitbit Sense are somewhat different in style. This new series appears more like a traditional watch, especially with the physical revolving bezel and stainless steel chassis of the Classic edition. Like the Apple Watch 6 and all prior Apple Watch models, the Fitbit Sense is a sporty-looking squircle.

Unlike the Apple Watch, the Fitbit Sense has no protruding buttons. Instead, on the right side, it has capacitive touch controls. From our perspective, it’s a very sleek effect. The Sense’s 1.58-inch AMOLED display features a 336 × 336 pixel resolution. That’s less than the Samsung Galaxy Watch 4’s resolution, which starts at 396×396 pixels for the smallest watch size and rises to 450 x 450 pixels for the more extensive selections. Most people won’t notice the difference, but the Galaxy Watch’s display appears more apparent when comparing the two watches side by side.

Color variations and watch straps are available on both watches, allowing personalization. Metallic finishes are available on the Galaxy Watch 4 and the Fitbit Sense. Plus, at any point, you may replace the provided bands with ones that better fit your unique style.

A smartwatch is only as excellent as its health functions in most circumstances. Both two smartwatches offer a variety of capabilities for keeping track of your physical and mental health. The body composition analysis feature on this Samsung watch can even tell you your body’s makeup through bioelectrical impedance analysis.

When it comes to health features, the Fitbit Sense is the most immersive of all the top Fitbits. Fitbit’s stress-reading EDA and skin temperature sensor are one-of-a-kind, and they’re designed to help you get a better sense of how you’re doing. It’s too soon to tell if these measures are helpful, but Fitbit deserves credit for trying something new. Heart rate monitoring, sleep tracking, SpO2 reading, and menstrual cycle charting are all available on both smartwatches and the capacity to do FDA-approved ECGs to diagnose atrial fibrillation.

However, the ECG function on the Galaxy Watch 4 is only available if you pair your smartwatch with one of Samsung’s top smartphones. Any Sense user can check their heart rate with their Fitbit smartwatch to see if there’s any reason to be concerned.

Whether you want something that auto-tracks (or auto-pauses) your activity, correctly follows your route through GPS, gives you crucial metrics in real-time, or supports a wide variety of workout kinds, you can use either smartwatch for precise workout monitoring.

Our Samsung smartwatch workout test was impressive, but Fitbit Sense’s Active Zone Minutes function is still one of our favorite ways to reach fitness objectives. It’s advised that you get 150 Active Zone Minutes per week, as recommended by the AHA and WHO.

They both have several communication and productivity functions and health features. Even though Google owns Fitbit, the Galaxy Watch is one of the two Wear OS smartwatches.

On the other hand, Fitbit Sense runs on a proprietary operating system. Although the Wear OS capabilities on the Samsung Galaxy Watch 4 are more advanced and comprehensive, Fitbit’s software is straightforward, simple, and ideal for first-time smartwatch users.

Similarly, Fitbit Sense has fewer apps than the Samsung smartwatch. You’re likely to learn Fitbit’s activity tracking app or even Fitbit Premium with Sense. Still, you might discover the best running applications or exercise programs you already use with the Galaxy Watch 4. Google’s suite of apps, such as Google Maps and Google Play Music, is also available on the Galaxy smartwatch 4.

Samsung’s smartwatch does not have Google Assistant, a notable omission. For the time being, Bixby is your only voice control choice. The Fitbit Sense works with both Google Assistant and Alexa (you can only use one at a time), allowing you to ask your favorite AI questions right from your wrist.

Now, let’s talk about some critical disparities in terms of communication and compatibility. To begin with, the Galaxy Watch 4 is only compatible with Android phones, whereas the Fitbit Sense is compatible with all of the most OK phones, including iPhones. Both may be used to take calls and respond to SMS, but only with a compatible Android phone. Yes, even if your Sense is connected to an iPhone.

In addition, the Galaxy smartwatch 4 includes LTE capability for an extra cost through a telecom operator, whereas the Fitbit Sense does not.

To mirror notifications or activate your voice assistant, your Sense must constantly be connected to your phone. Without sacrificing communication capabilities, the Galaxy 4 can function independently of a phone.

Fitbit Sense’s claimed 6-day battery life is spectacular compared to the Samsung Galaxy Watch 4’s 40-hour battery life. (The battery life is roughly 12 hours if you’re actively using GPS.) It helps that you don’t have to remember to charge the watch every day because it’s supposed to be worn both day and night. You can even leave your charger at home when going on specific weekend vacations.

We discovered that features like an always-on display and routine fitness tracking demand a daily charge on the Samsung Watch 4. The battery life of Samsung’s latest wristwatch is a little hit-or-miss, but as long as you’ve accepted that you’ll have to charge it for a few minutes every day, you should be fine.

The Samsung Galaxy Watch 4 is available through Samsung for around $250, with LTE variants available for $50. AT&T, T-Mobile, and Verizon support it, and most significant retailers carry it.

The Fitbit Sense costs around $200 and is available straight from Fitbit. It’s also available from big electronics retailers, including Amazon, Best Buy, Walmart, and others. Which Should You Buy: Samsung Galaxy Watch 4 or Fitbit Sense?

Both the smartwatch come highly recommended by us, and both are reasonably priced. But, if you’re debating between the Samsung Galaxy Watch 4 and the Fitbit Sense, here’s our recommendation:

The Samsung Galaxy Watch 4 is the smartwatch with the most features. It comes with more sophisticated software, communications capabilities, and a few configurable options.

If you have a Samsung smartphone, get it. See our Samsung Galaxy Watch 4 vs Classic guide for more information on which design option is best for you. 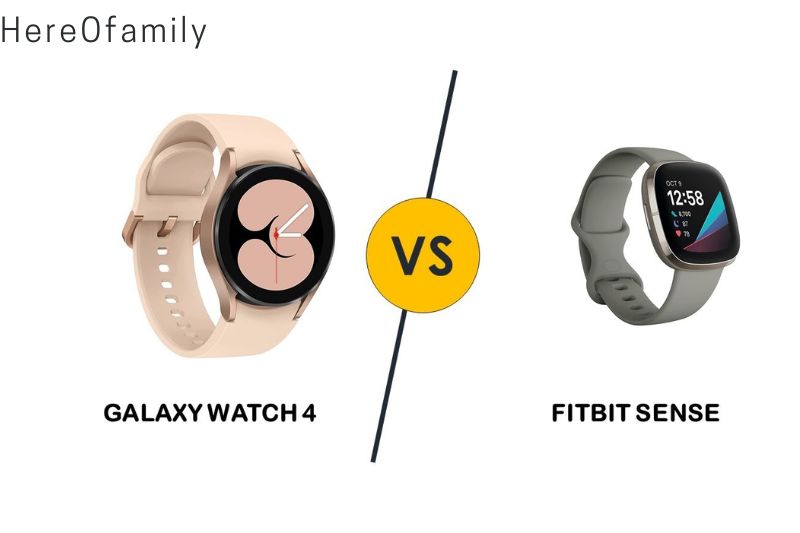 If you own an iPhone, the Fitbit Sense is a better health device with better connectivity. Beyond the percentages of your physical makeup, this smartwatch’s approach to helping you understand your body is comprehensive. It won’t keep you connected to the rest of the world like the Galaxy smartwatch 4, but it will save you connected to yourself.

Is Fitbit compatible with the Samsung Watch 4?

Is the Samsung Galaxy Watch 4 capable of measuring body temperature?

You can assess your exertion levels and avoid hyperthermia by monitoring temperature variations with a temperature sensor. Is it worthwhile to purchase the Galaxy Watch 4?

The crisp appearance, clever software, and outstanding health sensor of this Samsung smartwatch make it a promising improvement that costs less than last year’s edition. In addition, the Classic model retains the famous revolving bezel.

Is there a fall detection feature on the Fitbit Sense?

These apps employ built-in accelerometers to detect falls and transmit an alert, but they aren’t free and may not be exactly what you need. So, to keep things simple, here’s what we’ll do: At the time of writing, the Fitbit Sense does not include a fall detection feature.

If you are in the market for a smartwatch and fitness tracker, these two are among the top options. They are both attractive and offer an impressive array of features.

But which one should you get? That will depend on what you are looking for in a smartwatch and how much you want to spend. HereOfamily hopes this guide is helpful for your choice.