There are many different types of microphones available for a variety of uses. For instance, some microphones are designed for enormous stadium performances, while others are made for a professional recording studio. In today’s article, we will discuss what is a lavalier microphone and how it is different from normal microphones.

What Is a Lavalier Microphone? 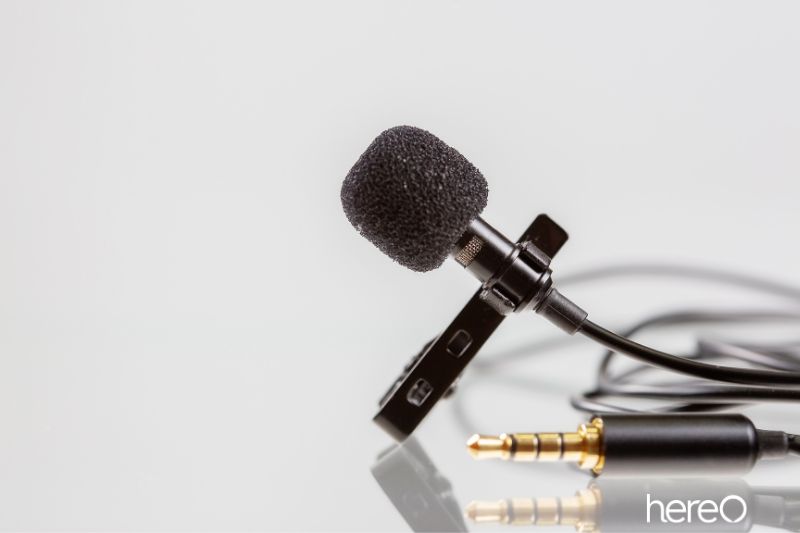 A lavalier microphone, also known as a lapel microphone, is a small, clip-on microphone that is used to capture sound in a variety of settings.

Unlike other types of microphones, the lavalier microphone clips directly onto clothing, making it easy to use in situations where a handheld microphone may be too intrusive or difficult to use.

In most cases, wired lavalier microphones are plug-and-play devices that include a lavalier small microphone, audio adapter cable, button battery, and foam windscreen as their primary components.

It can only be utilized in fixed settings or small-scale movement. The connected lavalier microphone is less sensitive, making it ideal for novices with basic recording requirements.

The most popular wireless lavalier microphone in use today is a UHF wireless system. The essential components of this device are the transmitter (mic), receiver, lavalier microphone, audio converter cable, battery, camera coldshoe, and foam windshield.

This type of transceiver primarily uses UHF wireless transmission technology, which has the benefit of stable audio transmission.

Over the past few years, the 2.4GHz wireless lavalier microphone system has gained popularity. To achieve the wireless transmission of vocals, 2.4G digital sampling frequency band signals are used.

The 2.4GHz wireless lavalier microphone system, which works with DSLR cameras and mobile phones for vlogging, is primarily made up of a lavalier microphone, a transmitter (TX), a receiver (RX), a lithium battery, and foam windscreen.

The 2.4GHz wireless lavalier microphone has the benefits such as strong anti-interference capabilities, long receiving distances, steady signal, beautiful and small design, and ease of use.

The transmitter (mic) for wireless lavalier microphones can either be worn on the collar or linked to an external microphone via a 3.5mm audio cord.

Benefits and Drawbacks of Lavalier Mics

There are many circumstances in which someone could wish to record or amplify what someone is saying, but it goes without saying that you would not want to see actors using a microphone while they are speaking on screen.

One of the reasons a lavalier microphone is employed on stage as well as in movies is due to how discrete it is.

A reporter might, for instance, use a covert lavalier microphone while conducting on-camera interviews.

The size of the microphones also makes them portable, which makes them particularly suitable for field reporting in journalism.

Additionally, when working on a set, this eliminates the need for a single boom operator to follow the actors around the scene and potentially sabotage the shot in order to capture sound clearly without being visible on camera.

The likelihood of picking up the rustling sounds created by the actor’s or journalist’s clothing increases because the mics are fastened to their garments.

The necessity for clarity and crystal clear sound is significantly more crucial on set than it is during a live broadcast when a journalist is reporting to camera.

There are steps that may be taken to stop clothing from rustling, such as pre-production dry runs where wardrobe and the crew meet to evaluate the actor’s attire and identify any issues.

Due to the lavalier microphone’s portability and convenience, there are additional factors to take into account when it comes to sound quality. Due to the worse sound quality compared to normal microphones, the recorded sound may be more distorted in some circumstances.

This might be the case if a reporter was reporting from an area where there was poor visibility due to inclement weather, strong gusts, or boisterous crowd situations.

Lavalier microphones also use batteries, which do not often have the greatest lifespan and almost always need to be changed while in operation—often at the most inconvenient time.

As a result, crew members must be present to change the batteries in between takes and continuously check the batteries’ levels throughout a given shot.

When To Use a Lavalier Microphone 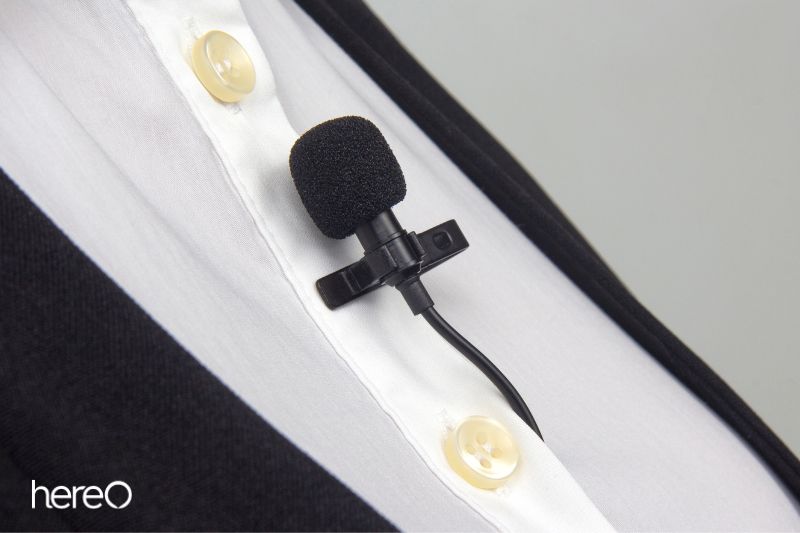 Lavalier mics are perfect for lectures, interviews, presentations, and other speaking engagements. They are also great for recording in noisy environments, as they can help reduce background noise.

These mics are lightweight and unobtrusive, making them ideal for recording on the go or in tight spaces.

Using a lavalier mic properly will give you a clear and accurate sound. It is important to ensure that the mic is placed close enough to the speaker to capture their voice without picking up too much background noise.

The mic should also be placed so that it is not obstructed by clothing or other objects. Ultimately, when you need to record audio clearly and accurately, a lavalier mic is the way to go.

With its small size and unobtrusive design, this type of microphone can be used in a variety of situations to ensure your sound is crystal clear.

When recording numerous people’s lines using a single microphone, the sound may get distorted or certain lines may not be as clear as others.

Lavalier mics, on the other hand, are only powerful enough to effectively pick up the audio of one performer, allowing you to separate audio clips that may subsequently be used for the editing stages later in the process.

How To Attach And Position a Lavalier The key distinction and benefit of a lav microphone over other types of microphones is the smaller, more covert size. They can be fastened to a person’s body or clothing without being seen in the photo thanks to their small size.

A lav microphone cannot be totally invisible unless it is worn within the talker’s clothing or is fastened to their skin. The audio recording will be compromised if the person with the equipment moves since their clothing can make rustling noises via the microphone.

There are many techniques to stop and handle garment rustling. One typical fix is to cover the mike with a material that won’t make rustling noises.

Another common fix is to wrap the microphone in a body tape pillow to keep the head from coming into contact with the fabric.

Be inventive when hiding your lavalier microphone. You have a variety of alternatives, ranging from stitching a lavalier directly into the costume to inserting a lavalier through the buttonhole of a dress shirt.

FAQs about What Is a Lavalier 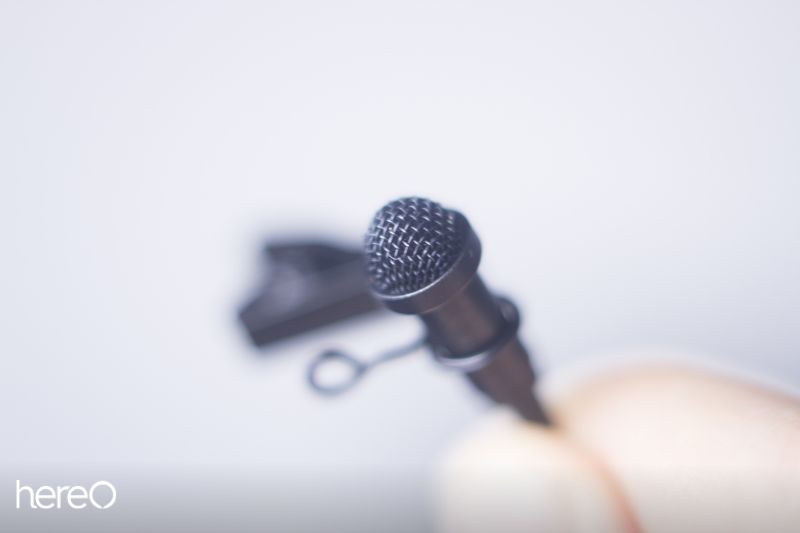 What is lavalier microphone price?

A full set of lavalier microphone can cost around $80-150.

Are there XLR lavalier microphone?

Yes, there are lavalier microphone with XLR connection.

The two types of lavaliers are unidirectional and omnidirectional, respectively, and both pick up sound equally well.

What is the difference between lavalier and lapel mic?

There are actually no differences between lavalier and lapel mic, since lavalier microphones are also called lapel mics.

What is another name for a lavalier mic?

Lavalier microphones are an excellent choice for a variety of audio needs. They are lightweight, portable, and offer highly accurate sound quality.

Whether you are in a studio or on stage, a lavalier microphone can help capture clear sound for your audience. If you’re looking for a microphone to match your specific needs, be sure to take the time to research and find the right one.

Thank you for reading our article. HereOfamily hope you enjoy reading.