Nothing beats putting on a set of headphones, relaxing, and listening to your favorite music. But if you start hearing unwelcome noises like hissing or buzzing, your moment of calm could rapidly evolve into aggravation. You might wondered: “why do I hear static in my headphones”.

What Is Static in Headphones? An ongoing, faint hissing sound called static noise can be heard over the music you’re trying to listen to. Poor electrical connections or interference from other devices are typically the culprits.

Sometimes you can hear it as soon as you put on your headphones, and other times it begins later. If the device playing your music is moved or shaken, static noise may get worse.

Static noise in TV or radio speakers is typically brought on by a weak signal. There are numerous potential causes for headphones. We’ll talk about them below. Even while the majority of manufacturers design their equipment using durable, high-quality materials, there are still certain weak places. It makes obvious that the regions that are tugged and twisted the most would be the weakest place.

When disconnecting, many people pull the wire itself rather than the shell around the jacks. Due to repeated bending and twisting, these same regions are also most likely to experience stress, which frequently results in a loose or detached terminal.

We strongly advise you to grip the plug’s casing tightly when plugging in and disconnecting any cable. Never pull on the wire directly. This can be fixed on your own if you feel comfortable soldering. Otherwise, a specialist might easily fix it.

Another potential cause of static noise is the headphone jack. You will hear static if this connector isn’t functioning properly because it sends the audio signal from your device to your headphones.

The headphone jack could have a few different problems. A solid connection might not be possible because the connector is rusted or filthy. It may be cleaned effectively in a variety of methods without endangering your electronics.

Another factor that could contribute to a bad connection is damage to the plug or jack itself. Try cleaning the headphone jack with a cotton swab and some rubbing alcohol if you hear static in your headphones.

Over time, the headphone speaker can also sustain damage, which will reduce sound quality and increase static noise. This is typically brought on by physical harm, like being crushed or bent.

After years of continuous usage or if it is dropped, a headphone speaker may become damaged.

To resolve this issue, you will need to swap out the damaged speaker for a new one that goes with your headphones. However, not all headphones can be fixed in this way, so if you can’t fix your headphones, you might need to buy a new pair. Because wireless gadgets emit radio waves that interact with neighboring electronics, such as Bluetooth speakers and cordless phones, they can cause static noise in headphones.

The audio signal that is being sent to your headphones may be interfered with by other wireless devices like routers, microwaves, and cordless phones.

You will hear static noise in your headphones if there are too many wireless devices close to you or if they are not sufficiently protected.

If your headphones are poorly manufactured or made of cheap materials that can’t withstand loud volume levels without producing static noise, that could be the cause. If this is the case, changing them out for a better brand can permanently solve your issue!

Even after cleaning the device’s auxiliary ports, if the static still appears on that particular device, it probably has a subpar DAC (digital to analog converter).

By converting digital signals to analog ones, a DAC makes digital media like CDs, MP3s, and streamed music audible.

Inadequately insulated built-in DAC chips on computers and mobile devices can pick up electronic noise from adjacent components. Additionally, a poor DAC might not be able to play music at a high bitrate, which would result in static or a high noise floor.

Your headphones may be making static noise if you’ve changed the audio settings, such as the equalizer or other complex audio settings. This is typically due to some settings being incompatible and potentially interfering.

As an illustration, increasing the bass on your headphones might interact with the treble setting and produce static noise.

How to Fix Static Problem on Headphones Switch to a Different Headphone Jack or Reinforce It

One of the most frequent causes of static in headphones is a defective headphone jack. If the jack in your headphones is detachable, you can either replace it or reinforce it with insulating tape.

By cleaning the device’s auxiliary port, where your headphones are connected, you can get rid of static. You’ll be happy to learn that none of the methods for cleaning an auxiliary port involve a lot of time and work.

Using a compressed air can is the simplest and most efficient way to clean an auxiliary port. Some of them even include a nozzle extension to help you reach confined spaces.

Simply aim the air can nozzle at the port and start firing. Any debris should be moved by the compressed air and taken out of the port.

By using compressed air, the chance of forcing any debris deeper into the port, where it can become trapped and be more difficult to remove, is completely eliminated.

If a compressed air can is not available, you can use rubbing alcohol and cotton swabs, which are more typical home goods.

Turn your device off and soak one end of a q-tip in rubbing alcohol to wipe the auxiliary port. It’s possible that some cotton fibers need to be taken out. To capture as much dirt as possible, insert the q-tip into the port and move it around until it reaches the bottom.

To avoid short circuits, make sure the port is totally dry before turning the device back on.

Keeping wireless headphones as close as you can to the source of the music will help you avoid static problems. By making sure there are no solid metal objects between the headphones and the sound source, you can further minimize potential barriers.

Your device’s BlueTooth connection can be refreshed to improve the connection and get rid of static.

You must reset the audio settings to their default values or experiment with them until you find one that doesn’t generate any static noise in order to resolve this issue.

Take Care of Cables and Wires Any wires or cords should be properly bunched up before storing or carrying your headphones in a bag or pocket. Avoid rolling them too tightly, and you might even want to locate a tiny bag to store them in.

Damaged headphones can be repaired, although it is difficult. Additionally, speakers that have been repaired frequently don’t operate as well as they did when they were brand-new.

The best course of action in this situation is to get new headphones. After all, a set of headphones’ drivers are their most crucial component.

FAQs about Why Do I Hear Static in My Headphones 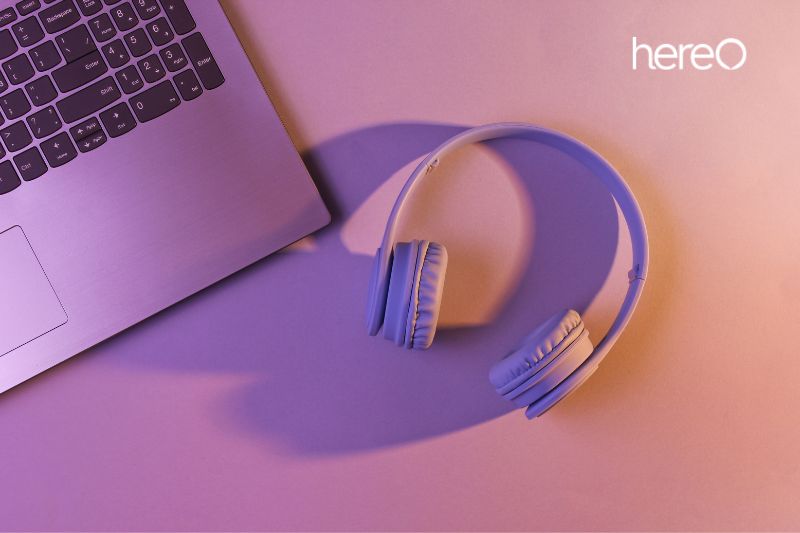 It is unlikely that the static you hear from a mic that cuts in and out will have a long-term impact on your headphones.

This sounds like when the radio is on but not fully seated on a strong signal. It can be compared to a certain type of white noise. In the audio chain, problematic parts such the turntable, preamp, receiver, or power amps might result in static.

How do I fix my static headset mic?

Consider unplugging and then plugging back in your headset or standalone microphone to the computer or other device. Try switching to a different USB port if you can. the microphone be moved (if using a standalone one).

Since the beginning of wireless technology, there has been a problem known as Bluetooth interference that can arise for a number of different causes. Signals can be obstructed by physical barriers like metal doors, or your Bluetooth device could be using an overused frequency.

The cause of static in headphones is often straightforward and easy to fix. With the right troubleshooting steps, you can get back to your favorite music in no time. So, don’t let static get in the way of enjoying your favorite tunes. If you’re hearing static in your headphones, take a few minutes to troubleshoot the issue today!