The Fitbit Versa 2 is the latest fitness tracker from Fitbit. It’s a great tracker for those looking for an affordable device that does everything they need. The Fitbit Versa 2 has a heart rate monitor and sleep tracking and is water-resistant. It also has a color screen and a comfortable design.

In this article, HereOfamily will be going over some of the features and benefits of this Fitbit tracker and finding out if it’s worth purchasing or not. 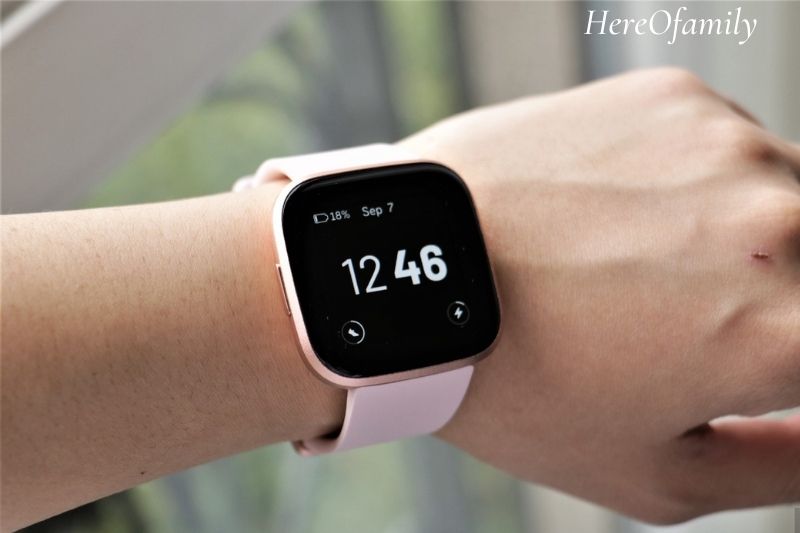 The Versa 2 was unveiled by Fitbit at IFA 2019 on 28 August. It can be purchased on Fitbit’s website, as well as at major in-store and online retailers.

This model was launched in the United States at the same price and in the United Kingdom at the same time as its predecessor. It’s slightly more expensive in Australia and is on par with the Apple Watch Series 3 in some other countries.

You’ll receive a seven-day trial of Fitbit Premium, Fitbit’s new subscription program when you purchase this watch. The Special Edition Versa 2 will offer a free 90-day Fitbit Premium trial to those who buy it (more details later).

The Versa 2 is a continuation of the Versa original, which was one the most comfortable smartwatches available. It isn’t too large or too small, so it will fit most wrist sizes. The watch is also light due to its tapered shape, which conceals its bulk. It is the only watch I have been able to wear comfortably for 24 hours a day, seven days a week, even while asleep. Fitbit should have made it easier to change the straps of this model — the Versa straps come with quick-release pins. The mount is too deep into the watch’s frame that it is difficult to get the pins to click, especially with the rubber strap. The review kit included a perforated leather strap, which was much easier to install but will cost you an extra $50.

Fitbit has replaced its LCD screen on the Versa 2 with an OLED display. This is the biggest enhancement that this model provides. It is bright, colorful, and easily visible from both the inside and outside. The screen was visible in direct sunlight and with polarized glasses.

The OLED panel also allows you to view your workout progress and the clock at any time. The always-on function is not customizable. You can only choose between analog and digital clocks. It also disables raise-to-wake. This means that you will need to double-tap or push the side button in order to wake the watch.

The display is still surrounded by a thick, bulky bezel that makes it look smaller than the postage stamp size. The Versa 2 gets rid of the annoying “Fitbit” branding that was below the screen on the original-generation model.

Fitbit Versa 2 Vs Versa 3: Which Is Right For You? Read this guide to get more choices.

The Versa 2 Battery Life Is Increible

Just like the Versa, the Versa 2’s battery life is impressive. It lasted for five days in my tests. If you enable the always-on display feature, this amount will drop by half. It’s still a great battery life for a smartwatch. I have used it more than any other.

Versa 2 now has a microphone that provides some voice control capabilities. It can’t be used as a speakerphone, because there isn’t one. However, if you pair it with an Android phone, you can talk replies to messages and it will convert them into text. (Sorry iPhone users, this product doesn’t allow you to reply to text messages.

This worked great in my tests. It was able to quickly and accurately transcribe my voice. To record a voice reply, you need to tap the screen three times. You can’t send a new message to yourself by voice, but you can reply to existing messages, so there is potential for improvement.

The microphone can also be used with the new Alexa functions. To bring up Alexa, long press the side button. From there, you can ask questions or direct them to Alexa-related tasks such as controlling smart home devices, setting alarms, and displaying the weather. This product does not have a speaker so all Alexa’s replies are displayed on the screen. It is also unable to play audio or perform other audio-related tasks. Alexa cannot manage the watch. All of your requests to Alexa, including alarms and timers are contained within Alexa’s interface. You can’t ask Alexa, like Siri on an Apple Watch to send you a text message or make phone calls from your phone.

You can’t even start a workout with Alexa. Alexa can’t be activated by voice command. Instead, long-press the side button, or tap the icon in the quick settings panel. This makes Alexa use a slow and two-handed process.

Fitbit claims these restrictions were put in place to conserve battery life and prevent erroneous Alexa activations. However, Alexa on Versa 2 can often be more trouble than it is worth. It doesn’t seem to have many purposes.

Access To The Alexa Feature Can Be Frustratingly Limited Or Clumsy

All the fitness features of the original Versa have been retained, including smart workout identification, heart rate monitoring and sleep tracking. This year’s new feature is the Sleep Score.

It attempts to convert your sleep-tracking data into an “X out of 100” rating of how well slept. My watch experience saw me average a Sleep Score score of 76. This is considered “fair”. Fitbit claims this feature will be available for all heart rate monitors.

The watch also has a new Sleep Mode that prevents notifications and lights from flashing while you sleep. It seems like this should have been available on the last model but it is now. You can activate the Sleep Mode via the watch’s quick settings screen, or through the smartphone app.

From there you can set it up to automatically turn on and off based on a schedule. Fitbit claims that it is working on a Smart Wake alarm, which will attempt to wake you up at the most optimal time of your sleep cycle. Unfortunately, it won’t become available until later in the year and I won’t be able to test it.

This fitness tracking features, despite not having an inbuilt GPS radio or relying on your phone to track it, are some of the best and most comprehensive of any smartwatch.

Although you can still get the same fitness tracking features from Fitbit’s other products, the Versa’s smartwatch capabilities are what will make you choose it over the Inspire HR or Charge 3. The Versa 2 has many of the same problems as its predecessor.

The Versa comes with only a few apps, so productivity tools such as reminders and calendars are not included. Fitbit claims that it has over 3,000 third-party watch faces, and apps available for download via its smartphone app.

However, there aren’t many well-known brands like Uber or the New York Times. You will need to pay the developer through their payment system if you find a paid app.

Maybe you need: How Does A Smartwatch Track Sleep?

Watchfaces On Versa 2 Are Difficult Changes

Spotify joins Pandora and Deezer as music options on the watch. The Versa app is useless because it only allows you to control Spotify playback on other devices.

Watch faces can be a pain in the flesh. The Versa 2 only can hold one watch face at once, so you will need to replace it using the mobile app. To go back to the watch face that you used in Fitbit’s app, you will need to go through the whole search process. You can’t save favorites to the app, so you won’t be able to see multiple watches at once.

This sleek hardware is not supported by many of the watch’s faces available. The entire process is cumbersome when compared to the ease of customizing watch faces for other smartwatch platforms.

Fitbit Pay is supported on all Versa 2 models. However, it was not available to me because my local credit union does not support it. It also has a smaller number of financial institutions and banks than Apple Pay, Google Pay or Samsung Pay.

Fitbit claims that it did not include too many smartwatch features because its users don’t want to be overwhelmed with unnecessary features.

They should consider the Charge 3, which is cheaper and has similar fitness monitoring capabilities to the Versa 2. It is essential that the functions of the company’s smartwatches be improved if it wants to compete in the market.

Versa 2 is a better product than Versa. The design improvements and new features make it a much more appealing product. It’s still not as appealing as it was before. While it’s a great device for tracking your fitness, this model isn’t a smartwatch. An Apple Watch or one of Samsungs Android offerings would be better choices.

Is a smartwatch worth buying? See this guide to have the best decision.

Is the Fitbit Versa 2 worth it?

The Final Word. This smartwatch and fitness tracker is a great combination, but it does not have a GPS built-in, which could prove to be a problem for runners. It’s still among the top-rated wearables under $200. Unfortunately, the best answer is no. It does not have a microphone. However, it can be used to receive and make calls. Android users, including non-iOS users, can respond to text messages with their voices. All users can also call Alexa using the microphone.

What’s the purpose of a Fitbit Versa 2 and what are its benefits?

It is a unique experience. Active Zone Minutes allows you to keep track of your heart health and exercise, as well as customize heart rate zones. This product uses our most advanced heart rate sensors and analyzes your daily calorie expenditure to give you actionable information about how healthy you are.

Is it possible for the Fitbit Versa 2 to text and phone?

Your Fitbit Versa can send and receive texts from Android smartphones and tablets. Notifications must be enabled. Brief Replies are short, targeted responses that can only be sent. How long does a Fitbit Versa 2 last on its battery?

Versa 2’s battery life is “five-plus” days.The long battery life means that you don’t have to worry about the next 24 hours without power. Simply plug the device in and start showering.

The Fitbit Versa 2 is a great tracker for those who need high-quality and affordable devices. Many health benefits have been attributed to these wearables, so you might be interested in checking them out.

It is great for monitoring heart rate and sleep and enables you to control your smartphone. If you are looking for a good wearable, this is a great tracker to get.