It’s a question many parents ask themselves – is baby powder safe? The answer isn’t always clear, as there is conflicting information. Some experts say that baby powder is perfectly safe, while others caution that it can be dangerous if inhaled. So what’s the truth?

What Is Baby Powder Made Of? 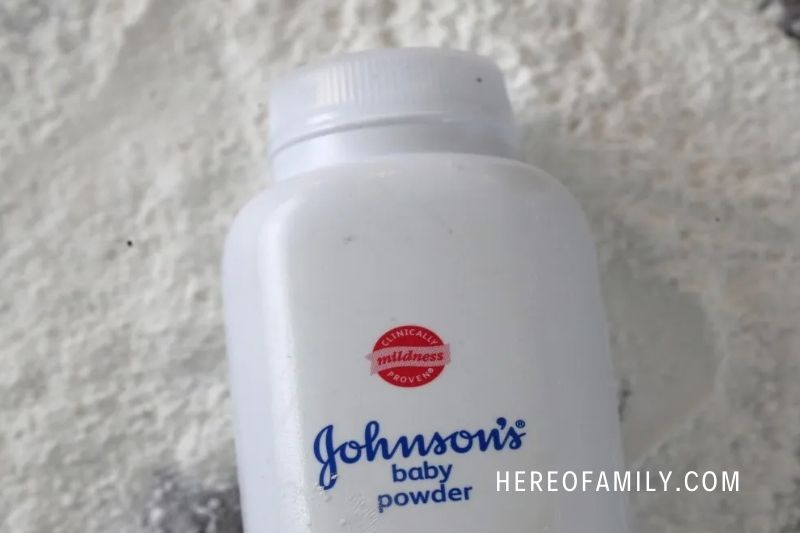 Talcum-based baby powder is derived from the mineral talc, rich in magnesium, silicon, and oxygen. It absorbs moisture and decreases skin-on-skin friction, which may aid in the prevention of rashes such as diaper rash. That’s why it was a fixture on changing tables for many years.

However, read the label carefully since many baby powders on the market now do not contain any talc at all. In place of talc, several “talc-free” powders are created using cornstarch, another naturally absorbent component.

Pediatricians are worried about anything other than a relationship to cancer rather than how the powder may harm a child’s lungs if inhaled.

“People who use significant quantities of baby powder, especially around the infant’s face, risk the youngster breathing this extremely small particulate matter into the lungs,” says Joel Kahan, M.D., head of pediatrics at Syosset Hospital in New York. “If there is a large enough load, it may damage the kid.”

This is not a new worry. The American Academy of Pediatrics issued a study on the dangers of talcum powder aspiration in 1981. According to the analysis, these instances were “grossly overestimated” and were associated with a 20% fatality rate.

“This may happen from unintentional inhalation of bulk powder if a can tips over onto a baby’s face,” according to the AAP. “Talc pneumoconiosis has been linked to many baby deaths.”

Pediatricians advise parents to use oil-based lotions or creams instead of powder. Parents may also use cornstarch, which has bigger particles than talcum powder and is less likely to clog the airway. These products are equally efficient in keeping newborns dry.

“The essential thing you can do is change your baby’s diapers often and keep them out of wet or dirty diapers,” Dr. Kahan advises. Suppose you’re worried about baby powder being connected to cancer. In that case, you need to know: More than 13,000 individuals have filed lawsuits against Johnson & Johnson, alleging that the product caused their cancer. Some of them had mesothelioma, a rare disease caused by asbestos exposure.

According to Reuters, between 1971 and the early 2000s, the corporation suppressed that their talcum powder sometimes included trace amounts of asbestos.

Talcum powder is manufactured from talc, a naturally occurring mineral utilized in various consumer items, including cosmetics, due to its propensity to absorb moisture. It is found in subsurface deposits that often include asbestos, a known carcinogen, posing the risk of contamination.

A Johnson & Johnson spokesman verified to Parents.com that the talc used in Johnson’s Baby Powder does not contain asbestos.

“Thousands of tests over decades corroborate this,” says Susan Nicholson, M.D., Johnson & Johnson’s vice president of women’s health. “Not only do our suppliers and we regularly test to guarantee that our talc contains no asbestos; our talc has also been tested and proven to be asbestos-free by several independent labs and institutions, including the FDA, Harvard School of Public Health, and Mount Sinai Hospital.”

Nonetheless, Johnson & Johnson announced a voluntary recall for a single batch of baby powder in October 2019. The FDA took this action after discovering small quantities of asbestos in a tested bottle. Johnson & Johnson, on the other hand, claims that after completing 15 fresh tests later that month, it found no asbestos in the identical container of baby powder. Two third-party laboratories also found no asbestos in 48 additional examinations of samples from the recalled bottles.

Johnson & Johnson has had victories, defeats, and mistrials in court. A New Jersey state jury ordered the firm to pay $750 million to four plaintiffs in February 2020. According to the Associated Press, a jury in Oakland, California, favored one of the plaintiffs who had terminal mesothelioma in March 2019. She was granted around $29 million.

That judgment came after a Missouri jury ordered Johnson & Johnson to pay $4.69 billion to 22 women in 2018 (a Missouri appeals court subsequently lowered that to around $2.1 billion in June 2020). A Los Angeles jury awarded $25.7 million to another woman that same year. However, in May 2019, a jury in South Carolina ruled that Johnson & Johnson was not to blame for the plaintiff’s sickness, marking the fifth judgment in favor of the firm.

That is yet unknown.

According to the FDA, talc-based baby powder has been linked to ovarian cancer since the early 1970s. According to Reuters and the peer-reviewed journal Epidemiology investigations, business organizations have ignored earlier concerns about talc and ovarian cancer.

Large-scale research of 250,000 women conducted by the US government and published in the Journal of the American Medical Association (JAMA) in January showed no clear evidence of a relationship between baby powder and ovarian cancer. However, the research distinguished talc-based baby powder and other powders created with cornstarch alternatives.

According to the American Cancer Society, other studies using a different approach than the JAMA research have revealed “a slight increase in risk” for ovarian cancer when women apply talc powder on their genitals.

Research released in October discovered that contaminated talc is connected to mesothelioma, a rare disease normally associated with asbestos.

The American Academy of Pediatrics (AAP) advises against using baby powder since newborns don’t require it (or most other lotions and oils) because it might irritate their already sensitive, fragile skin.

The AAP also warns that if too much baby powder is breathed, it may be dangerous to children. Furthermore, there has been speculation about whether long-term use of talcum powder near the bikini line or genital area puts women at a higher risk of ovarian cancer, as many lawsuits against powder manufacturers claim, and whether regular exposure to talc increases the risk of ovarian cancer later in life.

Although talcum products have been asbestos-free since the 1970s (in its natural form, talc includes some asbestos, which is known to cause cancer when breathed), the relationship between asbestos-free talc and cancer, if any, remains unknown, and studies have generated conflicting results.

Why is a baby powder not recommended?

The American Pediatric Association advises against using baby powder, citing worries that talc, originally contained in certain formulations but has since been phased out, might be ingested and injure newborns’ lungs.

The American Academy of Pediatrics (AAP) advises against using baby powder since newborns don’t require it (or most other lotions and oils) because it might irritate their already sensitive, fragile skin.

For the vast majority of individuals, the answer is no. No evidence is using baby powder or any cosmetic talcum powder that is easier to breathe in increases your risk of lung cancer. According to several research, those who work in talc mining and processing are at a slightly increased risk.

While Johnson & Johnson no longer use talcum powder in its products, this is a relatively new development. Its talc-containing goods may still be seen on shop shelves in the United States today.

Many parents wonder if the baby powder is safe with recent reports of possible links between talcum powder and cancer. Talcum powder is made from talc, a mineral often found near asbestos. Asbestos is a known carcinogen, and exposure to it can increase the risk of developing cancer. Although there is no definitive evidence that talcum powder causes cancer, some studies have suggested a possible link.