Whenever you acquire a new camera lens, you frequently also get a free lens hood. While many photographers keep it on without giving it a second thought, this useful tool has a purpose beyond aesthetics. So, what does a camera lens hood do?

What is a Camera Lens Hood? 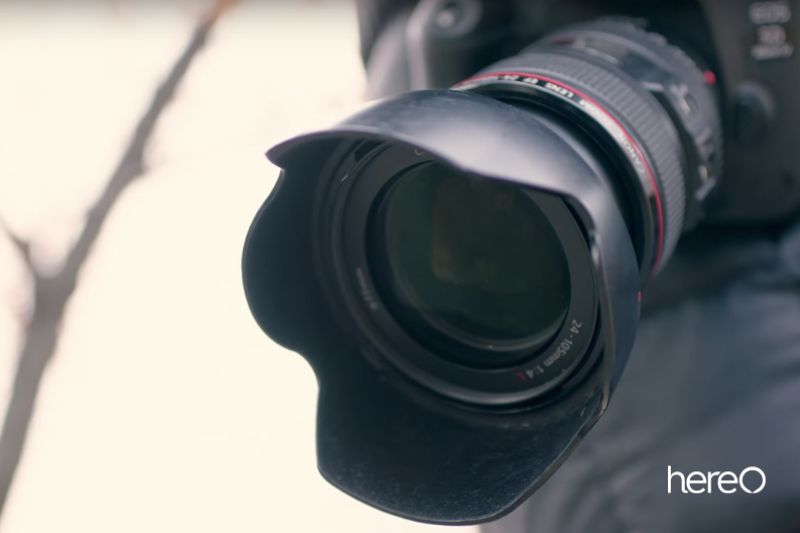 You can add a lens cowl as an add-on to the front of your camera lens. Although it is often composed of metal or plastic, you can make one yourself out of any material that blocks light.

There are two common forms of lens hoods: tube lens hoods are completely round, whereas petal lens hoods lack edges. The design of your camera’s sensor and the lens you attach to it will both have a significant impact on the sort of lens hood you employ.

What Does a Camera Lens Hood Do? Your photos may turn out poorly if there is too much sunlight, especially direct sunlight. Think about being outside on a sunny day and having to strain to see. You instinctively raise your hand to block the glare of that light. Exact same principles apply when using a lens hood.

Up to twenty glass elements are arranged and placed inside the lens to achieve focus, zoom, and image clarity as well as to lessen aberrations and distortions. The direction that light travels to the image sensor is also controlled by lenses.

Lens flare, or bright spots and streaks on your image, is the result of sunlight striking the lens directly or at an angle. Sharply angled light entering the lens from the side is problematic because it will cause waves to bounce about inside the lens, which is similar to the impact of light leaks.

It goes without saying that a camera lens cover can assist filter light from other sources besides sunshine. Whether you’re shooting in a studio or beneath bright street lights, a hood can help reduce glare.

Lens hoods are frequently used to shield lenses from damage as well as the elements in addition to their advantages in terms of optics. Lens hoods can assist prevent damage to your lens, such as fractured glass, that prevents it from functioning properly.

If you drop your camera, your lens hood will likely be the first thing to contact the ground; even if it breaks, changing the hood will be much less expensive than fixing or replacing a lens.

Additionally, if your lens unintentionally swings and strikes something head-on, it can shield the front glass element of your lens from scratches and cracks in addition to a lens filter.

Shield lens from the elements

Some lenses have weather sealing, making it possible to use them in wet, icy, or dusty conditions. With a weather-sealed camera and telephoto lens, going on a wildlife adventure virtually ensures capturing a beautiful image of a snow leopard. But if the front of your lens is covered in snow and ice, all that expensive equipment is useless.

Camera lens hoods are the easiest approach to do this. They offer a deep enough natural overhang to protect your lens from the weather.

Avoid smudges on your lenses Finding fingerprints on the front glass of our lenses has happened to all of us. Most of the time, they’ll be our fault because we frequently reach for a lens only to find that the lens cap is missing and that we accidentally smudged it with our fingers.

A lens hood is an easy solution to handle this. The hood offers an additional layer of defense against fingerprints and any other surface that might leave an oily smear, just as the previous two points.

While some may argue that a camera lens hood has little to no impact on image quality, the truth is that it often does.

Any potential depth and contrast in an image can be severely wiped out by a flare that strikes the lens at just the correct angle. When colors are substantially faded and muted, an image that would have been vibrant becomes useless.

It’s similar like driving on a sunny day while having light shining in your eyes. You can make out just enough information to drive safely, but there is no longer any clarity, and the glare is really strong.

The stray light that strikes the lens’ front element and generates the flare is blocked by a lens hood. Additionally, your images will benefit greatly as a result of the light being reduced, allowing for greater contrast and clarity, as seen in the image above.

Additionally, your photographs will benefit greatly as a result of the light being reduced, allowing for greater contrast and clarity, as seen in the image above.

How To Attach a Lens Hood Most lens hoods are simple to attach to and remove from your lens. Most of them contain markings to indicate where you should align the lens with the hood when they are packaged with your lens.

Align these two marks before twisting the hood until it locks into place. As the locking mechanism clicks into place, you should audibly hear it.

Some lens hoods screw onto the lens, especially those designed for older lenses. There isn’t a certain way to arrange these hoods when they are lined up.

Simply set the lens hood in the proper position, then secure it in place by tightening the side screw. According to my observations, this setup works best with larger, metal lens hoods for large, bulky lenses.

The lens hood cannot be attached backwards under any circumstances. Not only does this scream amateur, but the hood will prevent you from using the lens’s movable rings.

You will still see people firing in this manner on the street even though there is absolutely no justification for doing so. The correct approach should be used if you’ve gone to the trouble of attaching it to your lens.

When To Use a Lens Hood When You Want Contrast in Your Images

If you’ve ever taken pictures on a sunny day, you know how challenging it can be to get the contrast right. By keeping your lens hood on, you’ll be able to prevent losing contrast, which will allow you to make adjustments in post-production rather than having to make more significant changes because of bad light entering the lens.

In Conditions with Many Light Sources

Lighting is a key component of photography, but having too many sources of light can make it challenging to take pictures without extraneous light leaking into them.

Regardless of how well-composed your image was, it might be challenging, if not impossible, to perfectly correct a photo with light problems after the fact.

In Rough and Rugged Locations

Countries like Norway and Iceland are excellent travel destinations for photographers because of their breathtaking natural scenery. However, you might occasionally find yourself in areas of those (and related) locations where there is a risk of dropping your camera or running into objects like rocks.

When Shouldn’t You Use a Lens Hood? Despite the fact that lens hoods have many advantages, there are several circumstances in which you should avoid wearing one.

Even the most skilled photographers find it challenging to take pictures in windy conditions. During strong gusts, camera lens hoods can occasionally function as a sail, causing camera shake and unclear photographs. Or worse, they can cause your camera that is placed on a tripod to fall over.

If you’re using a more telescopic lens and a slower shutter speed, taking the cap off would be a good idea. You can always steady your camera with a reliable (perhaps weighted) tripod or another level surface if your images are still blurry after doing so.

While employing a lens hood can help prevent water from getting on the glass, it’s important to keep in mind that their primary function is to lessen the amount of light entering the lens. In overcast conditions, lighting levels are naturally lower and lens flare is less of a problem.

If it’s not pouring and you’re taking pictures in an overcast environment, you might want to forego using your lens hood. In case the situation changes later, you can keep it in your bag.

When You Want Lens Flare in Your Images

Lens flare occasionally helps a photograph seem and feel better. Consider the golden hour, for instance, when the sun’s glaring rays can be seen in your photograph. Using a hood can obstruct your creative vision if you desire lens flare in your shots; remove it and begin shooting instead. 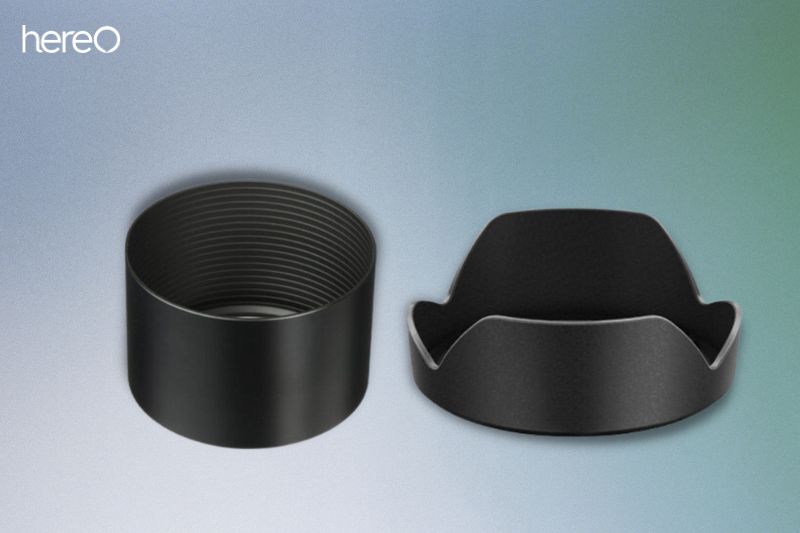 Tulip hoods and round hoods are the two most common styles of lens hoods on the market today. How do they compare side by side?

The shape of tulip hoods, also known as petal or flower hoods, makes them appear more intriguing. The straightforward explanation is that they are made to completely hide ambient light.

The petal hood design is perfect since camera sensors are rectangular; its notches give the four corners of a picture the most space feasible.

This also implies that you must carefully put on a tulip hood. You’ll probably end up with a portion of the hood in your picture if it’s oriented incorrectly.

Although they are often less effective, round hoods have a simpler construction. Because of this, a petal hood is basically nothing more than a spherical hood with extensions to increase its coverage area.

Not that this implies that hoods with a spherical shape are bad. Many telephoto lenses, particularly primes, employ a round hood as opposed to a tulip shape, and they function perfectly well—far better than nothing. Use the lens hood that came with your lens at the end of the day, and you should not be dissatisfied.

FAQs About What Does a Camera Lens Hood Do What is a cylindrical lens hood?

A cylindrical lens hood, also known as round lens hood, typically has a diameter that is just a little bit wider than the lens’s widest point and a front edge that is straight.

When should I use a lens hood on my camera?

Always wear a lens hood when shooting. Even when you’re indoors or it’s dark outside, stray light may enter your lens from the front, lowering the contrast in your picture.

Should I use a lens hood on a cloudy day?

On cloudy days, photographers frequently choose not to utilize their lens hoods, but these are the situations where having a hood is particularly crucial because it can be challenging to spot issues before they are downloaded onto your computer.

Is lens hood necessary for 50mm?

Some 50mm lenses have recessed front lens elements, eliminating the need for a hood to cover it. Lens hoods are required for 50mm and other focal length lenses, though, if you’re using one to keep stray light from ruining your shot.

A camera lens hood is a must-have accessory for any photographer. Not only does it improve the look of your photos, but it also protects your lens from scratches and other damage. So, next time you’re shopping for a new camera lens, be sure to pick up a lens hood as well!

Thank you for reading this article from HereOfamily. We hope you enjoy reading!