There are a lot of different fitness trackers on the market these days, but two of the most popular are the Fitbit and the Apple Watch. Both of these devices have a lot to offer, but which one is right for you?

In this article, HereOfamily will compare the Fitbit vs Apple Watch to help you decide which one is the best fit for your needs.

Apple Watches are only compatible with Apple’s iPhone lineup, which is upsetting for people who aren’t fans of Apple’s closed ecosystem. On the other hand, Fitbit is a fitness-tracking device that works with both iOS and Android phones. The Apple Watch has a striking design that includes a physical dial, known as a digital crown, and a side button.

Each model has tough Ion-X front glass, but the Series 7 takes a step further with an IP67 designation that makes it water and dust-resistant. Fitbit watches are sleek and straightforward, with an easy-to-use interface that complements rather than replaces your phone.

The visuals and graphics have been toned down, allowing for a battery life of up to seven days on a single charge. Fitbit provides more personalization options, including different clock faces and apps.

Still, they have a rudimentary app store that reminds us of the original Pebble, the first wristwatch to reach the market almost a decade ago. The Fitbit, on the other hand, has lower pricing and better health sensor performance when it comes to tracking activities and sleeping. Because it integrates seamlessly with your iPhone, WatchOS for the Apple Watch is the fundamental differentiation between the two companies. Messages, notifications, Apple Wallet, calendars, and more are just a tap or swipe away, giving you a phone-like experience on your wrist, replete with calls and texts that seamlessly transition between watch and phone.

You may surf through news feeds, play games, and check your daily planned meetings from here while configuring your layout in either a grid or a list for scrolling. Multitasking is smooth, apps are fully featured with visual elements, and you can talk to the Siri smart assistant on all models and a frictionless layout.

Battery life suffers due to the power and display, which we found to be just over a day and a half with moderate use in our tests. Overall, the UI is smooth and superior to Fitbit’s usage in daily tasks, although it lacks in-depth fitness tracking.

The Apple Watch lacks basic details like specific workout types or the maximum heart rate you’ve reached on the run, practical sleep recommendations, and an in-depth search like the Fitbit.

A Fitbit is a fantastic alternative if your primary emphasis isn’t reading through the information on Reddit or replacing your phone, but rather getting notifications at a glance, tracking in-depth health indicators, and exercising frequently.

Fitbit’s sleep and workout tracking are among the best in the industry, and the company also hosts leaderboards and awards achievements to add a game element to the experience. The operating system for Fitbit devices varies, but all three models below have an always-on display, so you can see the clock whether or not your wrist is lifted. (On the highest-end Apple Watch, the Series 7, this option is only available.)

The Charge 5 uses a simple display and limits apps to only necessary capabilities like timers, scanning, and payments on the entry-level tier to produce a useful smartwatch. You can swipe between panels for each category by tapping and dragging. Although the touch screen is fragile, the haptics is very responsive.

When you upgrade to a Versa 3, you’ll notice that the UI is similar to an Apple Watch, complete with downloaded apps such as Spotify Controls, Find My Phone, and even Yelp. With the many apps, faces, and sensors available, Sense is a viable alternative to an Apple Watch.

Fitbit’s (save the Charge 5) support a variety of voice assistants, including Google and Alexa. They’re not as well-coordinated as Apple’s Watch series, which offers a consistent app experience across all of its devices.

Things to Think About Before Buying a Smartwatch

Whether you choose an Apple Watch or a Fitbit depends on your mobile device. Because an Apple Watch is out of the question, Android users can navigate through each Fitbit by price tier to evaluate which one is ideal for their goals and budget. Don’t dismiss Fitbit completely; you might prefer the more comprehensive health statistics and connected exercise experience even if you have an iPhone. Otherwise, Apple Watch provides an iPhone-like experience on your wrist, reducing the need to be distracted by pulling out your phone or even carrying it around if you use a cellular plan with your watch.

If you are interested in Fibit, read our article before deceding to buy: Fitbit Versa 2 Vs Versa 3

Your vitals are relayed through health sensors. Every watch on this list can detect irregular cardiac rhythms, but higher-end devices with electrocardiograms (ECG) can do so. Electrodermal Activity (EDA) scanners track perspiration to assist you in keeping track of and managing your stress levels.

SPO2 is a blood oxygen measurement that assesses the functionality of your circulatory system, including organs like your heart and lungs. Premium watches may even detect changes in your skin temperature and alert you if you’re becoming ill.

The screen size on your smartwatch impacts how much space you have to read texts, display notifications, and interact with your finger via touch. As evidenced by how the Charge 5 activity band we propose below makes the most of its limited screen space, bigger isn’t necessarily better. With a capacitive touchscreen, like the one found on the big Series 7, you can type, navigate, and watch visuals from your wrist, ideal for folks with weak eyesight or more giant fingers.

The Apple Watch Series 6 is the most recent flagship, with prices starting at $399 and rising as you customize the size, case material, and cellular capability. The Apple Watch 7 is expected to cost the same when it releases later this year.

Fitbit Premium vs Apple Fitness Plus

You can upgrade to a Fitbit Premium membership to expand your wellness profile. It costs $9.99 a month, while most Fitbit’s new trackers give first-time users several months free. Sophisticated activity and wellness insights, such as advanced sleep data, guided exercise routines, and mental health sessions with self-help guru Deepak Chopra, are available with Fitbit Premium.

Apple Fitness Plus, which costs $9.99 per month or $79.99 per year, is similar to Apple Watch. It doesn’t have the same features as Fitbit Premium, but it does have a growing library of workout sessions conducted by experienced trainers. Apple Fitness Plus sessions are held in magnificent Hollywood-quality studios. They include ten different types of workouts with built-in soundtracks that you can listen to on Apple Music.

There is no such thing as a perfect health app. However, if your primary objective is to lose weight, Apple Fitness Plus makes it simple and enjoyable. Fitbit Premium is a superior option for boosting your overall health relationship.

How We Conducted Our Research

I sorted both Apple and Fitbit’s current lineups—from their entry-level devices to their most premium offerings—and divided them into three categories based on price and performance to create a pool of watches to examine. I collected testing notes on each gadget over one week while owning several of them, notably the entry-level Apple Watch Series 3 and Fitbit Charge 5.

From tracking my sleep to ten hours of daily desk work and a nightly one-hour workout regimen comprising weightlifting and cardio, I incorporated each smartwatch into my everyday life. This gave me a notion of each watch’s performance accuracy, real-world battery life expectations, and overall usability in various settings, such as reviewing information while working or getting a fitness routine started.

I explored every nook and cranny of each app to see what works and what doesn’t, such as the Apple Watch 7’s ability to check SP02 on the fly and the Fitbit’s diet planning and achievement system.

If you intent to buy smartwatch, see this guide: Are Smartwatches Worth It?

What distinguishes an Apple Watch from a Fitbit?

If you wear the Apple Watch overnight, it tracks your sleep, but the information is limited and only shows how many hours you’ve slept. It doesn’t give you as much information about your sleeping habits as the Fitbit does. The Apple Watch begins with Wi-Fi and may be upgraded to include GPS and cellular connectivity.

Is the Fitbit more precise than the Apple Watch?

Many people claim that Fitbit is more accurate at counting steps. It’s more trustworthy and user-friendly because you can see them while walking. Of course, the Apple Watch is still valid, especially once calibrated. 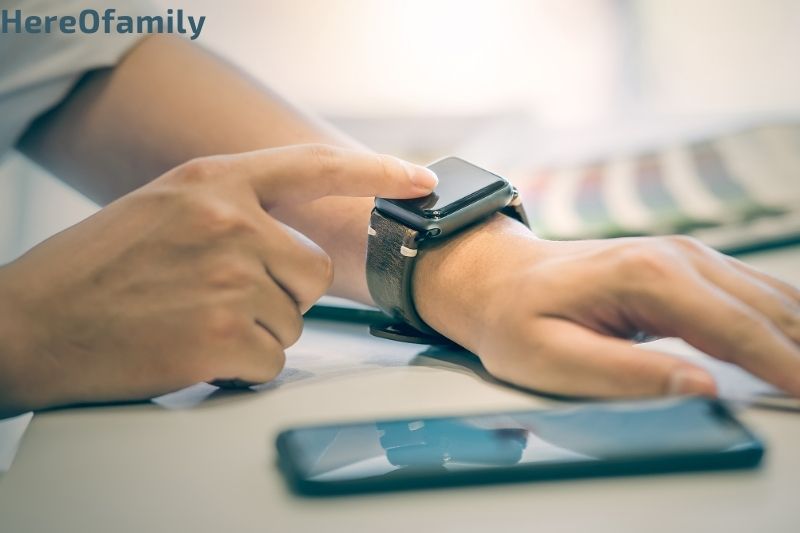 Is Fitbit compatible with the iPhone?

A Fitbit is compatible with virtually every modern smartphone. You can even add the Fitbit app to Apple Health if you have an iPhone. So, whereas iPhone users have a lot more options, Android users are confined to Fitbit, which comes in various versions.

Is Apple Watch up to the same hurdles as Fitbit?

Even though both the Fitbit and the Apple Watch are becoming more popular, each has its own unique set of features. Consider how you use your phone and how you would use each one, and then decide which one is best for you.