For gamers and content creators who are looking for a superior streaming microphone, it can be difficult to choose between the HyperX Quadcast S and the Blue Microphones Yeti.

Both offer high-quality sound, but have a few key differences in their specs. In this article, we will compare between HyperX Quadcast S vs Blue microphones Yeti specs. 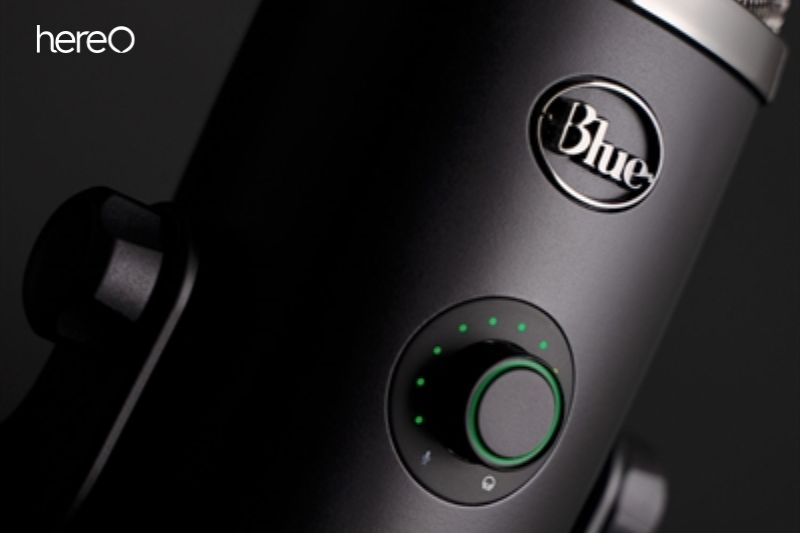 Although Blue is most known for their high-end, extremely costly microphones, they also developed the Blue Yeti, a cheap USB microphone that is currently the most popular on the market.

The Yeti is a plug-and-play USB microphone, so all you need to do to start recording is connect the device to your computer. No specialized software or drivers need to be installed.

The Yeti’s compatibility with both Windows and Mac operating systems is another benefit. This gives it a degree of adaptability that is uncommon in other microphones.

The construction of the mic is rather solid and has a highly polished appearance. It has an impressive build and sound quality, and if properly maintained, it should last a very long time.

Additionally, it offers a clear audio quality, a capturing capabilities, and is simple to set up and operate.

The HyperX QuadCast S is obviously for gamers, in contrast to the Blue Yeti, which is largely targeted at podcasters and YouTubers. The futuristic-looking microphone lights red while it is recording.

Compared to the Blue Yeti’s polished appearance, the multicolored design gives off a more relaxed vibe. However, the red-black combo should be more appropriate and enticing for gamers and live streams.

Similar to the Blue Yeti, the HyperX QuadCast S is a plug-and-play USB device that can be used right out of the box with any laptop or PC. Additionally, it works with both Windows and Mac devices.

The HyperX QuadCast S has the same four polar patterns as the Blue Yeti, though we venture to suggest that for gaming, you won’t need anything other than the cardioid. Nevertheless, it’s convenient to have the choices.

The fact that the HyperX QuadCast S has a desk stand with a built-in shock-mount may be the only area where it clearly outperforms the Blue Yeti. This lessens table vibrations while being recorded. 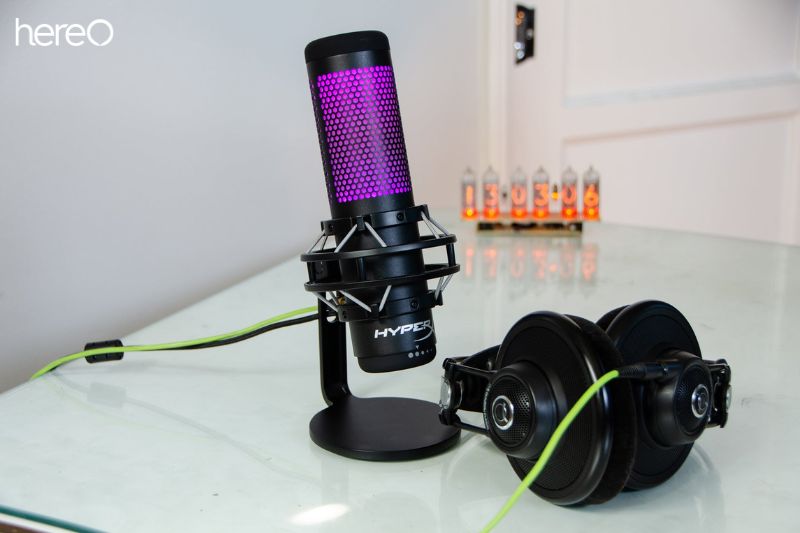 Both the Blue Yeti and the HyperX QuadCast S have a:

Only the Blue Yeti has a knob for adjusting the headphone level, although the HyperX’s headphone monitoring volume can be changed in your computer’s sound preferences. In addition, the HyperX QuadCast S has a shock mount built into it, which I’ll show you, to muffle minor bumps.

Without the supplied stand, the QuadCast S is 8 inches tall; when using it, it is 10 inches. Total weight is 1.6 pounds. Inside the black grille, its plastic body has a stunning RGB color. The RGB glows to show that it is on when it is functioning. A pop filter is integrated into the grille, but as I’ll show, it’s not very efficient.

The light may be turned on and off using the capacitive mute button on top of the microphone. Although the stand that comes with it is made of metal, the shock mount is plastic.

The 117-inch braided USB cable that is included features a ferrite core to lessen electrical interference. It has a lower noise floor than the Blue Yeti.

The headphone jack and cable aperture on the back of the QuadCast S are not positioned in the best possible way since they are quite difficult to use with the mount adapter.

Without the supplied stand, the Blue Yeti is 7.5 inches tall; when it is in place, it is 11.75 inches tall. The Blue Yeti has a metal body and a total weight of 3.51 pounds.

When the microphone is muted, the mute button flashes red, and when it is activated, the light remains red. It’s simple to overlook whether or not your microphone is muted because this is a little counter-intuitive. In comparison, the QuadCast’s entire body is visible as it glows red.

The stands that come with the Blue Yeti and HyperX QuadCast S have knobs on the sides that let you change the mics’ angles. To totally remove the body from the stand, they can be completely loosened. Both stands have soft padding on the bottom.

The Yeti and QuadCast S both contain 5/8th inch threading so that you may attach them to microphone stands and boom arms.

Additionally, the mount adapter on the QuadCast S features threading that is 3/8 inch deeper. Even after being taken off the stand, the shock mount for the QuadCast S remains attached.

Be aware that most of the smaller shock mounts that come with less expensive mic stands will not fit the Blue Yeti because of its thickness.

The design of each mic is quite clever, and the variances are primarily cosmetic. For its lighter plastic construction and lack of potentially chippable paint, the QuadCast earns a point over the Blue Yeti.

But I have to deduct a point from the QuadCast S because of how poorly the USB port and headphone jack are placed, which could put strain on the wires. The Blue Yeti easily outperforms the competition in terms of performance. It has four separate pickup patterns: stereo, bidirectional, omnidirectional, and cardioid. This makes it ideal for capturing everything from musical ensembles to podcast episodes and live streaming.

The USB microphone comes with a physical mute button and zero-latency headphone output, which only add to its already straightforward setup. All of this implies that you can use it and set it up without requiring advanced technical knowledge.

Regarding sound quality, the four distinct polar patterns make this a very adaptable device. The microphone is incredibly sensitive and can clearly pick up low-range frequencies. Because of this, it is very helpful for voice and conversation recording.

The stereo pickup pattern can be useful for musical recordings, although the sounds aren’t as clear and crisp as with a standard voice. The change is slight, though, and most people with untrained ears won’t even notice it.

The sounds are rich and require only minimal post-recording modification.

However, we don’t really advise utilizing this mic to capture music. Yes, it is technically conceivable because of the four polar patterns, however the music does not sound as clear as the voice.

The pop-filter is obviously a pleasant addition, but we also found that it does not provide particularly effective filtering. You’ll need to invest in an external pop-filter if you need to speak directly into the microphone in order to achieve the optimum results.

Aside from that minor issue, we appreciate this microphone’s touch-sensitive mute button. To mute the device in the majority of USB microphones, you must completely turn the gain dial.

Here, you can pause and resume recording with the press of a button and instantly switch back to the previous recording levels.

We particularly appreciate that when the mic is recording, it illuminates, giving the user a visual cue that recording is taking on. Gamers would adore having it as a part of their streaming ensemble in addition to the fact that it looks nice.

Overall, the HyperX QuadCast S is a great choice for people searching for a microphone specifically for live streaming.

HyperX QuadCast S vs. Blue Yeti: Which is For You?

Although it may appear that the difference in price between two microphones with identical polar patterns and recording quality is the deciding factor, appearances can be deceiving.

The Blue Yeti is an older model, thus its price fluctuates considerably. You can typically purchase it for between $110 and $130, though it occasionally drops as low as $90.

However, unlike the QuadCast S, it is missing a pop filter and a shock mount. If you only intend to use the Blue Yeti on your desk in its stand, the shock mount might not be necessary, but the pop filter surely makes a difference.

The Blue Yeti can also be connected by micro-USB. You most definitely need a dongle or a nice USB-C hub to use it with a more modern Mac. Is Hypercast QuadCast s worth it?

Yes. Quadcast S HyperX. This USB microphone is a favorite among both beginners and seasoned Twitch streamers due to its attractive design and high-quality sound.

However, by choosing one of the HyperX QuadCast S’s audio polar patterns on the knob, you can dramatically reduce background noise despite the lack of a noise cancellation capability.

Which mic type is best to pick up sound from all around?

An omnidirectional microphone can readily capture ambient sound. When an actor needs to move their head while filming, they are occasionally employed on set. In this manner, the voice’s clarity won’t be diminished.

In conclusion, both the HyperX Quadcast S and Blue Microphones Yeti offer great sound quality, but each have their own unique features. The HyperX Quadcast S provides superior sound quality with a shock mount, gain control, and four polar patterns, while the Blue Microphones Yeti offers convenience with its USB connection and four recording modes.

Whether you’re a content creator or a gamer, there’s something to love about both of these devices. Try them out for yourself and see which one works best for your streaming needs!

Thank you for reading this article. HereOfamily hope you enjoy it.